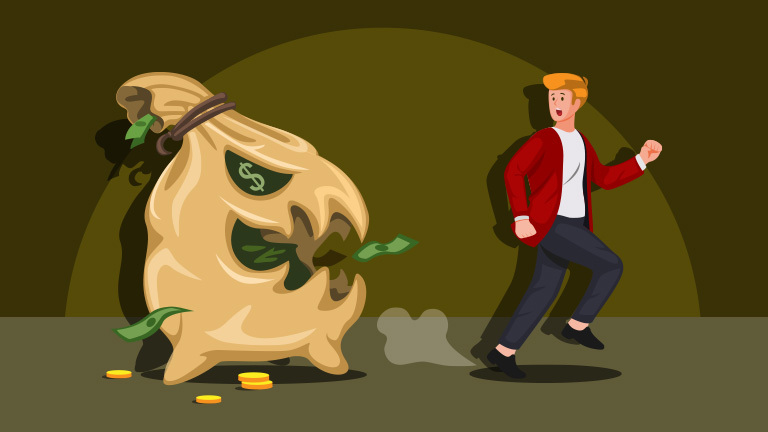 Let’s face it, money problems are scary. The thought of my hard-earned dollars disappearing overnight, or finding out my identity has been stolen and used to rack up thousands in debt, is enough to keep me awake at night. Yet, despite their fear factor, reading about real-life money horror stories is a great way to learn important lessons that could prevent you from having financial nightmares of your own.

💡 A hot card is a debit or credit card that has been used fraudulently and reported as lost or stolen by the account holder.

Our first victim started a well-paying job at a financial services company. It was his first time making a lot of money, and he learned the hard way that keeping all your money in one account can have scary consequences.

“One day, I went to check my account balance, and $10,000 was missing. I immediately went to the bank, and they found that fraud had occurred. I was residing in New Jersey, but somehow, someone had hot-carded my debit card and used it to make several withdrawals totaling $10,000 from an ATM at a Publix supermarket in Florida. Waiting for this to be resolved made it one of the worst weeks of my life.”

Fortunately, federal law required the bank to reimburse James for the fraud. However, he could have avoided his weeklong cashless nightmare by having more than one account. The experience taught James not to keep all his eggs in one basket, and he now recommends that others:

The Return of Zombie Debt

💡 Zombie debt is an old bill that was removed from your credit report but came back to haunt you after the creditor revives it.

Most people don’t realize that old debt can rise from the dead, even after it has been removed from your credit report. That’s exactly what happened in this money horror story.

“A few years ago, I went through a divorce. During the breakup, I started applying for apartments only to discover that my credit score had plummeted due to an old utility bill debt that had resurfaced on my report. Landlords refused to rent to me because of the unpaid bill.

Unfortunately, even though the debt was old, it was valid. My ex had opened the accounts in my name but failed to pay them unbeknownst to me. Shortly before the breakup, I received a call about one of the bills. I made a payment over the phone not realizing that by making a payment on this old debt — I was bringing it back to life! Fortunately, I was able to find a roommate while I repaired my credit, but the zombie debt scare made an already bad situation much worse.”

How to Avoid Zombie Debt

It’s never a good idea to let someone open an account in your name. You should also be wary of debt collectors who call you about a very old debt. Collectors who buy up old debt sometimes try to trick consumers into making payments they no longer have a legal obligation to pay. When you make a payment on a very old debt, you accept liability for it, and the debt clock starts over! You can avoid our anonymous victims’ fate if you:

💡 Americans who run out of money in a foreign country, whether by accident or because of theft or fraud, should contact the Embassy for help.

Our next nightmare occurred when a traveler underestimated their travel budget on vacation to Thailand. On the last day of their trip, they ran out of money and nearly missed their flight home.

“I spent all my pocket money and only had enough left to pay for the bus ride to the airport. While on the bus, I got confused, and I got off at the wrong bus stop. Since I had no more money, I couldn’t get another bus to the airport. As a last resort, I ended up walking around 10km to reach the airport for my flight home”

How to Avoid Running Out of Funds When You Travel

Craig’s scare could have been avoided if he had planned ahead and had a financial backup plan in case of an emergency. When you travel, it is a good idea to:

Fortunately for Craig, he was able to make it home. Had he missed his flight, he could have contacted the American Embassy for assistance. The Overseas Citizens Services (OCS) is a division of the U.S. Department of State’s Bureau of Consular Affairs and is responsible for the welfare of U.S. citizens who are abroad.

If you run out of money, the agency will contact loved ones on your behalf to ask for funds and will help them wire the money. If you don’t have people who can send you money at home, the ACS can approve a repatriation loan to get you back to the United States. You’ll have to repay that money afterward.

The Case of Mistaken Identity

Although much less common than identity theft, mistaken identity can wreak havoc on your financial history and can take years to overcome. In our next money horror story, Sha’Kreshia Lewis recounts being mistaken for a relative.

“I have a family member with a similar name and a social security number that is one digit different. This has led to a credit score mixup that has taken years to correct. I spent years disputing and fighting with credit bureaus, trying to prove to them that we are actually two completely different individuals.

I’d always thought that once you had a bad score, that was it; your score was bad for life. However, after much research, I learned that it did not have to stay this way. After years of hard work, I started my thirties with a credit score over 800.”

How to Recover from an Identity Mixup or Theft

Although Sha”Kreshia’s situation wasn’t the result of foul play, the effects of identity mixup are very similar to identity theft. Identity theft occurs when someone intentionally uses your private identifying information to impersonate you for financial gain. It affects about 1 in 20 Americans each year.

You can help prevent a mixup or theft by:

When identity mixups or theft* occurs, you can fight it by:

The College Freshman and the Con Artist

💡 When you lend money to friends, there is a 50% chance you’ll never be repaid.

“I was a naive and sheltered person from a small town. When a sophomore at my school befriended me, I agreed to give her a short-term loan from my college savings account to cover a minor delay in her financial aid. She promised to pay me back in four weeks, but the weeks turned into months while she created new excuses not to pay me. I continued to cover expenses and listen to promises to be repaid for everything.

When the school year ended, I naively believed a scheme she had concocted about summer jobs for us in her hometown as well as free room and board from one of her high-school friends. After a long bus ride to this hometown, the plan had no bearing in reality, and she asked to borrow more money!

I learned the value of money and budgeting and grew aware of the signs of financial abuse. I never lent money again.”

How to Avoid a Personal Loan Scam

Karen received help from her parents, who drove to pick her up and allowed her to move home. They also cosigned a loan that she used to pay off some of her debts. Although the disaster greatly affected her, Karen feels the experience taught her an important lesson about money and financial abuse. She recommends that others:

💡 Almost 21% of tuition dollars were paid electronically with credit cards, according to a 2019 report by the National Association of College and University Business Officers.

Aaron Carreno says he “made a deal with the devil” when he opened a credit card to pay for college tuition. The debt haunted him for years.

“I didn’t qualify for FAFSA, but I had a high credit limit and thought it was a smart strategy to earn reward points while also paying my tuition bill. However, this turned out to be more of a trick than a treat.

I didn’t have the funds to pay off the credit card debt quickly so it became a burden that haunted me until I refinanced for a lower interest rate.”

Paying thousands of dollars of tuition with a credit card can earn you many points, but it probably isn’t worth it unless you have the liquidity to pay it off quickly. Also, those cash-back rewards aren’t necessarily as good as you think they’ll be. On a 1.5% cash-back credit card, you’ll earn $30 in rewards on a $2,000 charge. But if you are charged a 2.75% convenience fee of $55, it will more than cancel that out!

How to Handle High Interest Debt

Aaron was able to refinance $14k of debt for a lower interest rate. If you are struggling with debt and monthly payments that are too high, it’s a good idea to:

Does debt haunt you?

It’s best to avoid a debt problem in the first place, but if you do find yourself with more debt than you can handle, there are plenty of debt repayment and relief strategies available. The right one will be unique to you.

Talking to a Certified Debt Specialist is a great place to start. They can help you decide which relief options are are right for your financial situation.

In these uncertain times, relief through debt settlement is an essential service. Unfortunately, the General Assembly of North Carolina is reviewing a bill that could make it illegal and remove a vital debt relief option during a time of increased need.

Let’s say you’ve decided that debt relief is the right choice to help you pay off your debt. As you learn more about the debt relief process, you start wondering how it could affect your credit score. If it could leave a negative impact, should you still use a debt relief service? Here’s what you need to know about debt relief’s effect on your credit score, plus some tips on improving your score in the long run. A personal line of credit is very similar to a credit card. A lender will check your credit score, verify your income and issue you a credit line for a certain amount. With a line of credit, you can access the funds when you need them as long as you have an available balance.

Updated July 2020 If getting out of debt were easy, fewer people would be in debt! We know that’s not the case because the average American household has more than $8,700 in debt and according to a recent study a record number anticipate being behind on their debt payments in 2020.  The problem is not that we have debt, but instead the mistakes that we are making that cause our debt to get out of hand.

Most of us have been in a situation where we’ve needed to borrow money. For some, borrowing comes in the form of student loans for college expenses, a mortgage for a new home, or a personal line of credit to start a new business. For others, borrowing has allowed them to make ends meet when they were in a financial bind.