According to the New York Federal Reserve, America’s household debt is the highest it’s ever been (in nominal dollars), with the previous peak being in 2008. But why? Well, one possible reason is that the current era of low and negative interest rates is tempting many people to load up on mortgages, credit cards, auto loans and student loans.

And it’s not just in the U.S. that this trend is evident. Looking at household debt data from around the world, courtesy of the International Monetary Fund, we can get a good picture of just how big this problem really is.

While the overall amount of Americans’ debt is more than double of the next closest country (China), America’s growing economy suggests Americans are still in a strong position to manage their debt load.  The biggest debt growth story comes from China; their expanding middle class has taken their household debt as a percentage of GDP (Gross Domestic Product) from 17.8% to 54.2% in the past 10 years. The growth has happened so rapidly that China’s central bank is concerned about a debt crisis, and is now looking for ways to safely manage household debt while continuing to grow their enormous consumer economy.

China’s household debt levels might be concerning, but even more troublesome is that Norway, Canada, the Netherlands, Denmark, Australia and Switzerland all have household debt levels above 100% of GDP. Switzerland in particular must be cause for concern at 127%. With Swiss interest rates firmly in the negative, the incentive to keep spending and borrowing could lead to a very unique debt crisis.

What does all this mean for the overall economic health of these countries? Gross Domestic Product (GDP) is the total market value of all the goods and services produced by a country in a specific year. It functions as a scorecard for a country’s economic health. Comparing household debt to the nation’s GDP lets us look at how much debt citizens are holding compared to the country’s overall economic output, so we can see if any countries might be facing a household debt crisis in the near future.

America’s household debt today is 75.9% of GDP, which is down from 98.6% back in 2007. Globally, household debt to GDP is just under 60%, and the overall amount of debt – $47.3 trillion – can be concerning. In an economic downturn, many people find their incomes dropping. As growing concern of a global debt crisis creeps back into the mainstream, are we in a safer place today due to higher GDP, or is the danger greater due to higher outstanding balances? Only time will tell.

This table shows how household debt is mostly concentrated to three regions – North America, Europe and Asia. These regions hold nearly 94% of the world’s household debt whereas Africa, South America and Oceania combine to make up the remaining 6%. The Oceania region that includes Australia and New Zealand is the most heavily indebted region at 116.8% household debt to GDP.

The United States household debt is an astounding $15.6 trillion, which makes up nearly 33% of the world’s total. Despite this astronomical figure, it’s still just 75.9% of the country’s GDP.  Of the 16 countries with a GDP of $1 trillion or more, four of them have household debt levels less than 20% – India, Russia, Mexico and Indonesia. This could be due to a cultural distaste for debt, an underdeveloped banking and credit system, or highly concentrated wealth within the country.

A crisis under control?

While the total amount of household debt has risen steadily since the last economic downturn, global economic expansion has made the debt look manageable on a “percent of GDP” basis for many countries. Other countries are rapidly adding household debt that’s outpacing GDP growth, due to an emerging middle class, or those dangerous cheap and negative interest rates. As the amount of debt grows across the globe, it remains to be seen whether those taking on additional household debt will also benefit enough from the growing economy to make good on their payments through the next economic downturn.

To create these charts, our researcher looked into the household debt of each country. The household debt and GDP figures were taken from The International Monetary Fund (IMF). The IMF is a primary source for a wide variety of international economic data. The most recent data available was for the year 2018 from their global debt database. Household debt data was available for 82 countries.

For the full research, visit http://bit.ly/WorldHouseholdDebt

Getting out of debt is hard for everyone, but when you’re broke, it can feel impossible. Living from paycheck to paycheck is stressful. Add high-interest debt to the mix, and you’ll find yourself in a vicious cycle. Trying to pay off debt when you are broke can lead to missed bill payments, overdraft fees, poor credit and limited opportunities.

As Gen Z-ers enter their twenties there has been a dramatic increase in their credit card use. At 31.4 million strong, credit-eligible Gen Z-ers make up 40% of all consumers in the United States. This influx of new spenders has reinvigorated the credit card industry after the lull it experienced when millennials were coming of age during the 2008 recession.  Why is this new generation so eager to use credit cards and will they learn from struggles of their parents…

If you’re in debt, you can likely point out the effects that it has on your life. The inability to accomplish your financial goals, facing high interest payments, and dealing with garnished wages may first come to mind, but have you considered the impact that debt can have on your mental health? 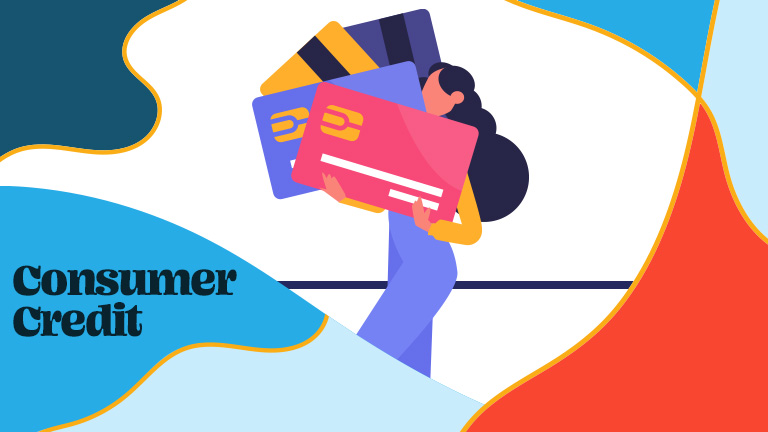 Consumer credit, also known as consumer debt, is any type of personal loan that is used by a consumer to pay for goods and services. If you need to buy a car, purchase a home, attend school, make a home improvement, or meet some other large expense you may consider taking on consumer credit debt. A payday loan is a short-term loan available to you based on how much you earn each pay period. Lenders require proof of income, usually a recent paystub, to qualify for the loan. The lender then grants a loan for that amount along with interest and/or a lender’s fee.